Just open the window and let fresh ideas into the classical music scene. The Twiolins are the pioneers of the new wave of ‚progressive classical music‘ and cause worldwide sensations and excitement in the concert halls. Ear pleasing harmonies, broad melodic lines and eccentric pulsating rhythms are the trademarks of their music, merging classical, avant-garde, minimalist music and pop-art-pop into a new sonic sound universe.

Since childhood, the two siblings share the stage. Together, they have won numerous awards and they are on tour several times a year. 2009, they founded a composition competition, now with more than 500 participants from 55 countries. A new and unique repertoire, which represents the creative excellence of the current generation of composers is thereby produced every three years.

It represents music of our time, which can be adventurous and wild, but also delicate and sweet. Music, which has nothing to prove, no intention to break any conventions, but only to inspire and that is precisely what it makes revolutionary and relevant. Like an universal language it touches the human inner spirit and continues to inspire the Twiolins to perform it again and again: in perfect synchronization with technical precision, and full of passion.

„The Twiolins took the audience to ecstasy“

The siblings Marie-Luise and Christoph Dingler are specialists in the category violin duo. Raised in a musical environment – grandfather a musical director, mother a Cantor and harpsichordist – they achieved their high level of musicianship and unique sound after years of performing together. Their passion and main objective is not only to perfect the existing repertoire, but also to carry the tradition of “violin duo “into the current times.

That’s why The Twiolins premiered their own Progressive Classical Music Award in 2009 to expand and develop the repertoire for two violins. In 2012, the Twiolins were honored for that with the Helene Hecht Prize of the City of Mannheim. From the award-winning works the CD VIRTUOSO was created in 2011, followed in 2014 by SUNFIRE.  2017 they released the album SECRET PLACES and in 2021 the album EIGHT SEASON EVOLUTION, which both received the silver medal of the Global Music Awards.

Both started to play violin at the age of 7 and participated already 4 years later in „Jugend musiziert“, a nation-wide competition, where they won the first award six times in the following years. Many other prizes during school time and study period followed.

Their talent was identified early and so they got junior students at the age fo 14 with Prof. Nodel at the University for Music and Performing Arts Mannheim. After they graduated school, they studied with Prof. Bratchkova, also in Mannheim, and finished their diploma of artistic education and solo education with best notes.

They shared the stage or collaborated for artistic projects with known artists  like ‚Spark – the classic band‘ , Yuri Revich, Julian Rachlin and Aleksey Igudesman.

They play both a violin from Martin Schleske and recently a viola from Gentges and Scheid, Berlin.

Bringing some fresh air in the chamber music scene and reviving the classical music – that was the goal of Marie-Luise & Christoph Dingler, when they originated the Progressive Classical Music Award (PCMA – former known as Crossover Composition Award. The competition is held every three years to expand the repertoire for  two violins. Performed in 2009, 2012, 2015 and 2019, the competition generated a great response and about 900 composers from 55 nations sent in their works.
video about the competition 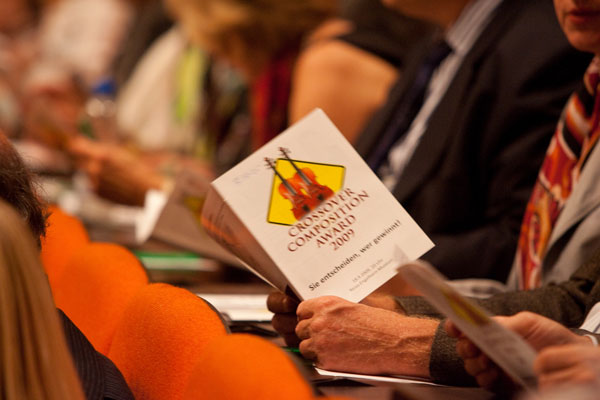 At the Progressive Classical Music Award the audience votes on the award.

The competition is seeking music which “gets under the skin and sweeps the audience off their feet” . Whether using virtuosity or great emotions– it’s the  composers’ choice. Only one  formal condition: The work should last about 5 minutes. The Competition rules have  been designed flexible intentionally to allow creation of  new music with contemporary emotions. This diversity of styles is supposed to contribute to a sustainable development of the classical concerts and audiences.

During the PCMA the audience is directly involved in the running of the competition. After a pre-selection by a representative jury, consisting of established musicians, composers and conductors ( Julian Rachlin, Aleksey Igudesman, etc.), six finalists advance to the  grande finale: All selected works will be  premiered by the Twiolins and the audience (300 – 400 attendees) then votes on the awards.

The winners, often young composers, receive prize money totaling 11.000€ which can support their studies/career. The compositions are published by internationally renowned publishing houses: 2012 and 2015 Peer Music, 2009 Ries&Erler. Additionally they will be recorded on a CD by the Twiolins: 2011 VIRTUOSO, 2014 SUNFIRE, 2017 SECRET PLACES.

What does “progressive classical music” mean?

Until 2015, the competition was called the “Crossover Composition Award” – “Crossover” in order to encourage composers to overcome genre boundaries and therefore guarantee a broad musical spectrum. A new term had to be found for the newly created, diverse music: “Progressive Classical Music”. “Progressive” means “increasing, developing” – just like the music that emerges with every new realisation of the competition. In the meantime, this term is gaining ground in the world of classical music: Renowned ensembles such as the ‘New Ideas Chamber Orchestra’ or ‘BartolomeyBittmann’ also use this genre name for their music and a ‘Progressive Chamber Music Festival’ with locations in Germany and the USA was founded in 2018.